Sooo… I’ve been addicted to this game since the moment I laid my hands on it. It’s pretty straightforward, but fun, challenging, and addicting. In a sense, it’s similar to Survival Game, or Oregon/Amazon Trail — welp, trail games in general. Well, it is named The Trail for a reason. lol (´ ∀ ` *)

However, unlike those mentioned games, The Trail is somewhat open-ended and continuously growing in a sense that even if you’ve already reached your goal, i.e. finding a town to settle in (which is the most goals of games like these btw), it doesn’t end there. You get the chance to develop your chosen town with other players in town, compete with other towns, and even finding a partner and establishing a family (though this is still coming soon)! Moreover, 22cans and Kongregate kept on expanding the world, providing more trail settings players can journey in.

Below is a sample trail map.

So, in the sample photos I’ve shown are 4 major locations — Green Coast, Pine Fields, White Mountains, and Sequoia Glen (these aren’t the only locations, mind you). And in these locations are various camps — rest stops, you could say. These are represented by the mini boxes, i.e. Misty Redwood, Lumberjack’s Rise, etc.

These camps are very important to gather your bearings and health. See those hearts in the upper left? That’s your health bar. You must never run out of health on the trail, lest you wanna collapse, have your things fall off, where other players can then get the chance to steal. Of course, other than that, you can also craft items in camps, and trade with people, revisit your house and the warehouse (it’s that option on the upper right) before moving on.

So anyway, the gist of The Trail is that, while on the trail, there are various items scattered about. You collect them and trade them, use them to craft things, (and then trade or) sell them at your town’s warehouse. There are also animals you can hunt, or trees you can cut down (however, you need to craft axes and slingshots for that). 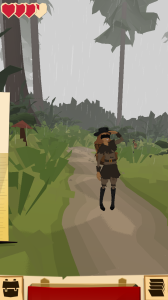 Now, what I love about The Trail is this: in the map found at the options on the lower right, you can basically revisit any place you’ve already been through before. Just click those tiny box camps and voila! You’ve teleported. lol (´ ∀ ` *)

Note: The above info is very useful btw, since some items are found only in certain locations. Well, if you think about it, this is kinda intuitive. For example, how on Earth can you even find crocodile teeth in a grassy coast location?! It’s more reasonable to find them in swamps. (´ ∀ ` *)

It’s a good thing The Trail community already resolved the location-item relationship issue for us though, and made a sheet for it. If you’re interested, you can click me.

So you see? Even after you’ve settled in one of the towns in Eden Falls, there’s more to it than just arriving in town. Actually, if you clicked the link above, you’d find many more locations to visit. Idk about you, but simple adventuring simulations like these can easily hook me up.

Now you’re prolly wondering by now: you mentioned something about crafting… How do we do that?

Crafting is the only thing that I’m in a love-hate relationship with The Trail. I mean, though it’s kinda obvious that because you’ve collected raw materials, naturally the crafting follows. But… but! THERE ARE SO MANY THINGS TO CRAFT! More like, there are so many things you can craft. Moreover, in each of the items you can craft, there are “levels.” Like, the more you craft a certain thing, the higher the level, the better you’ll be, and the higher the quality, the more durable and expensive the item will be. That’s kinda given but…! You get my point, right?

It can be a bit overwhelming, especially to someone who’s a bit of an “OC” and really wanted to have all her known recipes reach level 10. Ahahaha. (￣□￣」) I have a long way to go. ( ╥ω╥ )

Btw, the item recipes can be obtained by completing missions. If you noticed, some of my pictures above have this red bird (the name’s Koko) with an envelope and item near its wings… those are the items you need to gather for the quest given to you by a character named Beatrice. The category of the quests can either be Trader, Lumberjack, Hunter or Explorer. You can just choose any. And after gathering all the items, Beatrice will give you the recipe of a new item.

(Apologies, forgot to take a photo of the missions and/ Beatrice. Bear with this trading-by-myself photo instead. 😐 )

So anyway, once you’ve known the recipe, you can now craft that item. Please see picture above to give you a graphic idea how (it’s also featured in the trailer). Also, btw, the items you gathered also has “levels” (only 1-5 though). The higher the level of the raw material, the better your crafted item will be in quality. So, yeah, apart from the 10-level thing mentioned earlier, the quality also has 5 levels. Funnn~ :<<< (GETTT IT NOW WHY I’M IN A LOVE-HATE RELATIONSHIP WITH THIS?!)

Again, for a complete list of all quests / missions, and recipes, click me. It’s the same link earlier. Yayy for The Trail community! ❤

Anyway, I think I’ve covered all key points. The rest you can just discover by yourself.  :>> 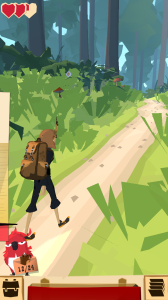 You play this online, but afaik you can also still play this offline. If you want to participate in filling the Warehouse crates, or in the Explorer’s Guild, or chat with your town-mates once you’ve built the Town Chat, theennn… online is good to go.

The following are the system requirements:

Welp, it really doesn’t require much so… that’s good. Granted it still has its own shortcomings, I still highly recommend it… especially if you’re a lover of adventure simulations or the likes. I’m really excited how this “family-building” will go in the future. We’ll just have to wait and see. o(≧▽≦)o

With that, I’ll rate this:

Hey, I think that’s a pretty decent, if not high rate. Though, yeah, again this is subject to opinion. I just love the world and the concept so much that I’ve overlooked whatever other issues some players might’ve found. xDD

Note: Btw, this is the official The Trail Help Center. It contains FAQs, amongst other things. So if you are curious or have a question yourself, you can immediately head there.

If you still wanna know more, or just wanna discuss more on this, please feel free to leave a comment below. I’ll try to reply to you as fast as I can. ヽ(>∀<☆)ノ lol

A Note to All My Readers

I’m writing this because I felt like I finally have to. First, I’d like to tell you all that I have never received any payments, be it monetary or otherwise, from any of the developers, writers, translators or makers of any novel, movie, and other things written on my site.

I am the kind of reviewer that writes what I feel and like (hence, the reason why some of them write-ups are more “dramatic” and exaggerated than normal lol). The things I recommend are recommended because I really feel that they deserve such attention and praise, and was not forced in any way by any third party. Hence, to be honest, I don’t personally know any of those prominent people behind these works I am recommending (perhaps except some translators that I’ve interacted and sort of befriended lol).

Hence, please do not blame me or look for me asking for refunds on things because I myself have no power (nor money) for that. I might occasionally say that you guys please try this out because it is good because that’s what I truly feel. But again, I am not by all means forcing you to.

My reviews only sprung from wanting to share the good things I’ve found, such as a good novel or an interesting game, and not really on ‘advertising’ them, expecting some monetary rewards in return.

Thank you very much!

11/15/17: Is it just me or is Reputation so full of really great trailer / teaser -worthy background songs for the good girl gone bad kinda type of series or movies? Or, idk, revenge, dirty sex, mystery/crime themes?’

01/06/18: Happy New Year guys! What are your goals and resolutions for this year? Mine is definitely putting more ‘meat’ on my reviews. I realised most of them were 80% rants and 20% review. lol Not really a good thing. hahaha :|